If you own a rug that has a one-of-a-kind design, you need to know a company that’s specially equipped to resolve color fading. Here at Elite Rug Care, we enjoy improving the aesthetics of woven pieces just as much as you relish the thought of having a rug that’s completely free of problems. We familiarize ourselves with the latest techniques and spare no effort to restore the distorted colors. Would you like to put our skills to test? You won’t regret doing so because we are proficient at making rugs beautiful again, and we are committed to returning yours to its original state.

Rug Color Restoration Is a Job for Us

Was your rug exposed to direct sunlight for a long time? Rugs are precious and delicate, so they can’t withstand the UV rays just like your eyes can’t. Fading can also occur because of bleaches and detergents as well as general wear and tear. Luckily, we have several ways to fix the fading colors, and they are equally effective. Elite Rug Cleaning takes full advantage of the state-of-the-art technologies that are available today. Instead of wasting time by trying to come up with a one-size-fits-all solution, we roll up our sleeves and work diligently on rugs to achieve the desired results.

Affordable Service for a Priceless Item

We say repairing is better than replacing. Sentimental value can’t be transferred from one rug to another. Plus, if you consider the hefty price tag of new rugs, you will see that a lot of money can be saved by hiring our rug color restoration service. We are on a mission to achieve your complete satisfaction, so you can always expect to hear good news from us. After we treat your rug, we don’t want it to fade again in the future. Therefore, ask us for prevention tips so that we can tell you how to maintain your rug in tip-top condition.

Elite Rug Care is a company that doesn’t disappoint. Our excellent track record for quality is proof that we complete jobs the right way. Don’t worry about depreciation. Our tried-and-true methods will help to boost your rug’s value. Although the color restoration process is complicated, we will finish it in a timely fashion because we don’t keep our customers waiting in suspense. Today is a good day for us to get started. Count on us to keep your rug repair intact. 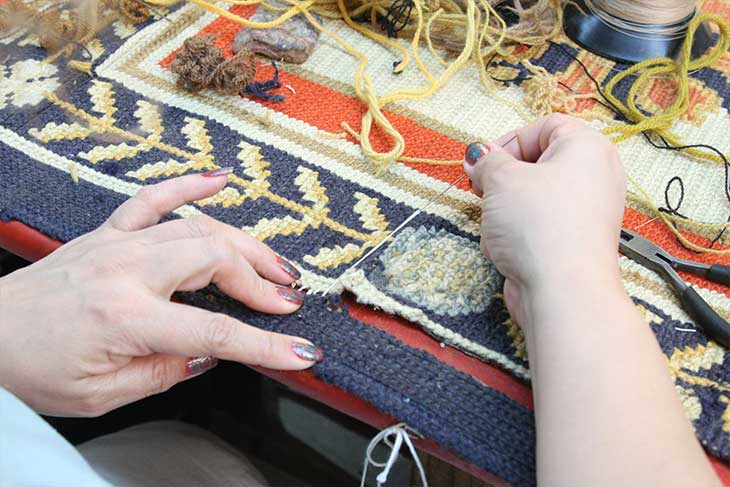 Some forms of rug damage are more noticeable than others. It’s easy to see a rip or stain on your favorite rug–less obvious, however, is the bleeding and fading of rug colors that occurs gradually. The reasons a rug can become discolored or stained are numerous: pet urine, wine spills, detergent chemicals, sun-fading, and more. One of the biggest reasons for a rug’s ruination, however, may have occurred before you bought the rug in the first place. With that in mind, we’ll spend most of our time focusing on the issue of rug discoloration caused by colorfastness.

In essence, colorfast is a term used to describe the ability of fabric to resist fading or bleeding (or to use the industry term, dye migration). If you bought a new rug and washed it for the first time, you may notice that the colors lost the vibrancy they once had. Or perhaps you observed the loss of color over time due to repeated washings or natural causes. Thus the problem becomes two-fold: 1) what causes color bleeding in rugs and 2) how does one prevent it?

Why Do Rug Colors Bleed?

There are many reasons why the colors in a rug might not be colorfast. Taking your rug to a professional rug repair service is the best way to determine your rug’s bleeding issues. Here are a few of the potential causes your rug care professional may identify as they specifically relate to the dyeing process:

Fugitive dyes are colors that bleed or fade after exposure to sunlight. These types of dyes come from nature, making them less permanent and therefore prone to color migration when saturated in the sun’s ultraviolet rays. Other reasons fugitive natural dyes may bleed include improper water exposure or a failed rug washing attempt.

Excess dye in the fibers of new rugs can cause them to bleed when they’re washed for the first time. To ensure that the excess dye doesn’t wash out into other parts of a rug, a professional rug washer will employ a dye stabilizing solution to prevent color migration.

Over-dyed rugs pose a similar problem to those with excess dye in that the colors crock (or bleed) when exposed to water. In the case of over-dyed rugs, however, the problem stems from dyes that were added after they were woven. The two rug types that fit this category are tea washed rugs, which are rugs infused with brown dyes to give them that “antique” look, and inked rugs, or rugs that have been painted with India ink in order to conceal areas damaged due to color bleeding.

Red dyes are susceptible to bleeding and fading when exposed to sunlight for extended periods. The minuscule size of red color molecules leaves them more vulnerable to the sun’s effects than most dyes. Persian rugs are particularly vulnerable due to the overwhelming presence of reddish colors.

Blue dyes are prone to fading due to the alkaline chemicals in detergents, along with the general instability of various types of blue dyes. This rule also extends to colors that have blue as a component such as green (which is a mix of blue and yellow) and purple (a mix of blue and red).

Other reasons a rug’s colors may bleed include high temperatures during the cleaning process, the use of high alkalinity detergents and acidic stains caused specifically by pet urine. Unlike the causes mentioned above, these color-bleeding reasons are the result of owner error. To avoid or amend these mistakes, the best course of action is to have the rug professionally washed.

Call Elite Rug Care – the best local carpet and rug cleaners near me today or at your earliest convenience to learn more about the services provided.